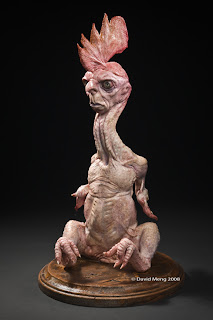 Have you ever looked closely at a plucked chicken or duck from the market, the ones with their heads and feet still intact? As morbid as they may be, for a creature designer like me, it's a subject rich in texture, detail and delicate colors. And they really lend themselves to being sculpted in polymer clay, with subtle washes layered up over the already translucent polymer material.
I'd been planning to do something involving a plucked chicken for a long time, but it couldn't be a mere study in still life. At some point I got the idea to put a human face on it, so I did this piece. The title is in German, because the idea reminded me of something Heinrich Kley might have done. Kley was a German cartoonist of the early 1900's who drew a lot of grotesque things with a sarcastic edge to them.
The weird thing is, after designing this piece, I read in a book of Forteana that in the 1800's, a farmer in Jersey reported a chicken with a near-perfect human face on it. Maybe it was channeling through me.
Photograph by Steve Unwin.
Posted by David Meng at 9:56 PM 19 comments: 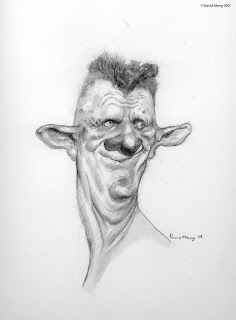 New Zealanders tell me the face on this one fits their stereotype of an Australian. Australians, what do you think?
It was actually based on a friend who is an American. It's another drawing from way back, when I was still but a lad.
Posted by David Meng at 9:43 PM 7 comments:

"Oldie but a Goodie" 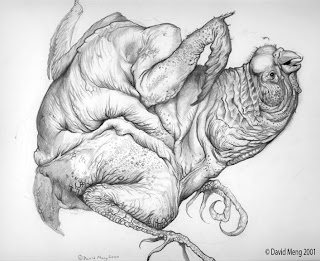 Drawn almost a decade ago, when I was still young.
Posted by David Meng at 9:37 PM 3 comments: 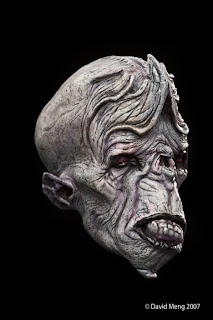 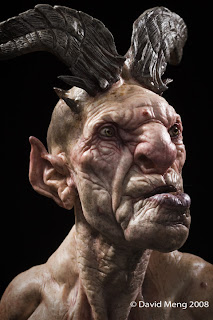 This piece was done in 2008. It's not that big, the face alone is about the size of a fist. I love satyrs, and have probably sculpted too many... I still have a whole bunch of faces I'd like to sculpt, possibly as full-sized models with individually inserted hairs, etc. Part of me doesn't want to keep repeating myself, but the other part has a strong desire to create more and better satyrs.
This guy was originally going to have a beard and mutton chops, which would be fine to do if he were cast in silicone or something. But he's done in polymer clay, and I haven't found a way to convincingly put `real' hair into a sculpture made in that stuff, or any rigid material for that matter. I could punch the hairs in before the clay is baked and airbrushed, in the way wax dummies are made (I think the hair is completed on them before they're painted), but I can only think that would leave unsightly holes where the needle inserts into the scalp. I don't know how it works to smooth the clay over in those areas, seems more trouble than it's worth.
At the same time, the total lack of hair does make him seem more of a bitter old bastard, which is what I wanted. Photograph by Steve Unwin.
Posted by David Meng at 9:12 PM 8 comments: 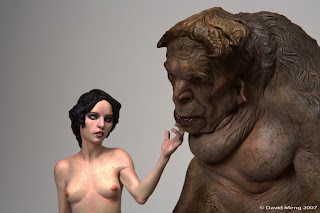 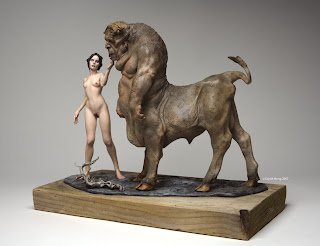 Here's a piece I did a while ago, which got into the book Spectrum. The concept isn't particularly inventive, e.g. girl with a beast, but I think there's value in exploring traditional imagery as long as you can find a way of doing it that's interesting.
In retrospect, I see many things I want to improve on or fix in this piece, but I'm relatively happy with it. I gave the girl a slightly 1920's-ish hairstyle, sort of a nod to Norman Lindsay, an Australian artist working during that time who did these darkly magical etchings of sirens and satyrs. Photograph by Steve Unwin.
Posted by David Meng at 8:17 PM 8 comments: